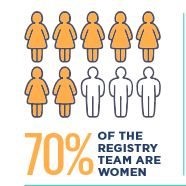 DIFC Courts highlight the achievements made in regards to gender equality. Since its inception nine years ago, DIFC Courts was the first court in the UAE to appoint a female judge, Malaysia’s Tan Seri Dato Siti Norma Yaakob, who served from 2008 to 2013 until her retirement. On March 7th, 2017, DIFC Courts welcomed a new female Singaporean judge, Justice Judith Prakash. As a sitting judge, she will add over two decades of experience as Judge of Appeal of the Supreme Court of Singapore with her expertise in commercial disputes, arbitration, company and trust law, and medical litigation.

Currently in the UAE, eight women serve in the UAE Cabinet, and two-thirds of all public-sector posts are held by women, with 30 percent in senior and decision-making positions. At DIFC Courts, women make up 70% of the Registry team. Top executive posts such as Chief Operating Officer and Co – Chief Executive Officer are held by women, Reem Al Shihhe, and Amna Al Owais, respectively, both of whom are Emirati nationals.

“We take great pride in our achievements in terms of gender equality… we are delighted to add further top female talent to our judicial bench with the appointment of Justice Judith Prakash,” said Chief Justice Michael Hwang on the occasion of the judge swearing-in ceremony, “However, I would add that Justice Prakash’s appointment is purely on merit regardless of gender. I have known her for many years as a colleague and consider her as one of the top legal brains in Singapore. We are privileged to have her join our Bench.”

To give some global perspective, some feel that in the United States the number of females in the courts is under-represented. According to Gavel Gap study, “Women are half the population – but less than a third of state judges….women have entered law schools and the legal profession in large numbers for the last forty years, but are under-represented in state courts.”

And the picture is not much different in the United Kingdom. In an article written by the Guardian newspaper, “The proportion of female judges in the UK is among the lowest in Europe. The Council of Europe reports that the England & Wales figure is 30%, the proportion in Scotland is 24%, while the Europe-wide average is 51%”. “In a perfect world, when the men and women who deliver justice look more like the communities they serve, there is greater confidence in our justice system overall,” says Christopher Kang, formerly in charge of the judicial nomination process for President Obama.