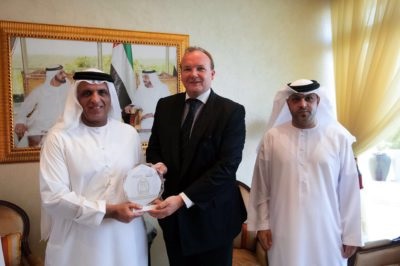 His Highness the Ruler of Ras Al Khaimah welcomed the Chief Executive and Registrar General of the DIFC Courts and praised the cooperation between the DIFC Academy of Law and Ras Al Khaimah Courts.

His Highness Honoured the Academy of Law and H.E. Justice Ali Shamis Al Madhani, DIFC Courts and Chairman of the Middle East Board of International Association for Court Administration (IACA), for organising the Judicial Excellence Programme for the Ras Al Khaimah’s judiciary.

“During the past few days, the training program was organised between the DIFC Academy of Law and Ras Al Khaimah Courts within a framework of partnership agreement,” said H.E. Justice Ali Shamis Al Madhani.

“The aim of this programme is to familiarise judges with the best global practices to establish justice and resolve complex cases, in addition to transfer judicial work experience and the conduct of litigation procedures from other developed countries to Ras Al Khaimah Courts, as well as the speed of litigation.”

And he mentioned that the programme targets judges from Ras Al Khaimah Courts where six workshops have been organised over the past few weeks by H.E. Justice Ali Shamis Al Madhani.